Remember those video games in the mall arcade that would move as you raced your virtual car down a terrifying racecourse? They would shake and tilt and vibrate in response to your too-young-to-have-a-license driving skills, providing a totally cool, totally 90s, tech thrill.

The science that allows any regular eight-year-old kid to pretend he’s Jeff Gordon is called haptic technology. For those of you who are maybe not the most tech-nerdy, haptics are a type of feedback tech that lets you feel and control virtual objects or – as we’re seeing more and more these days – control and touch real objects that are thousands of miles away.

Can you guess where this is going?

Haptic technology has come a long way since the arcade game racecar. We’ve seen how haptics can be utilized for long distance lovers who want to keep their sex life alive through vibrating smartphone apps and underwear that can totally enhance videochat-sex, but those two applications are only the tip of the virtual touch iceberg.

Raise your hand if you’ve been in a long distance relationship.

I have to put both of my hands in the air, as I’m a two-time offender. The highly mobile life of a startup founder (or tech writer, for that matter) means that those of us with sweethearts end up spending a significant amount of time apart from our significant others.

Developments in technology have made these types of relationships more possible than they could have been as recently as ten years ago. Starting with email and moving up to international texting apps, we’ve ended up with videochat right on our phones. It’s now possible to be instantly and constantly connected with your lover even when he/she is on the other side of the world.

So what’s the one thing that’s missing?

Touch. I know I already mentioned smartphone-controlled vibrators, but the sexual part of relationships is just a tiny part of the physical connections that lovers make every day. We kiss, we hug, we stroke; we simply lay a comforting hand on a shoulder just to show that we’re still there.

There’s one really cool development in haptic technology that address these non-sexual physical needs: The Hug Shirt. This awesome new design is embedded with sensors that register the strength of touch, skin warmth, and heartbeat of the person wearing it. The technology then packages up all that info and sends it via Bluetooth to whomever you want to hug (as long as they have the shirt too), allowing them to “feel” your embrace from anywhere in the world.

Beyond the obvious long-distance relationship benefits, imagine being able to comfort a friend who just had a tragedy or hug your mom when you’re living abroad.  As someone who has all too recently longed to do both of those things, I can say that The Hug Shirt is one of my absolute favorite developments in technology.

Touch is such an essential part of being human, one that has been eroded slowly as our lives have become more virtual. The fact that the same technology that has led us away from each other in the “real world” is now bringing us together in this amazingly physical way is truly incredible. 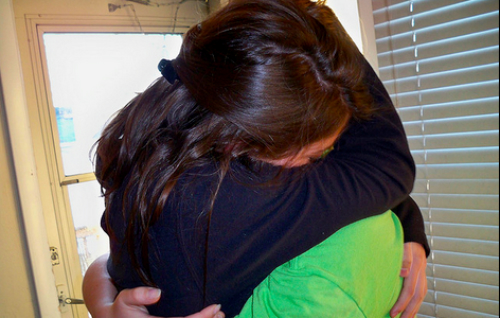 But back to the sexy part…

So what’s the next step in haptic technology? If we’re already stimulating each other intimately in these highly varied ways, the only logical advancement is to full-on virtual sex and I’m not talking old-school cyber sex or even camming. The way the technology is headed, full-body haptic suits are no longer a farfetched sci-fi nerd’s dream.

To be honest, my mind is still totally boggled by this possibility. We are about to enter a whole new world of human sexuality, one that could include not only long distance communication between humans, but also interactions with virtual beings drawn from the human imagination.

The thought is both titillating… And terrifying.

SAFAFU: The Secret to Success In Dating, Sales, and Life: Over-Communicate