Dating sites targeting religious people are by no means a new thing. Sites like JDate (which targets Jewish singles) and eHarmony (which is primarily for Christians) are old players in the online dating game and pairing up young singles has been the domain of religious communities worldwide for hundreds of years.

But what if you don’t fit exactly into the stereotype of Christian or Muslim or Buddhist or Jewish? What if you firmly believe in your higher power, follow certain teachings, but choose to eschew others? Will a mainstream dating site with a religious slant work for you?

For the founders of Hipster Shaadi, nothing was working. The old-school “auntie” system traditionally employed by Muslim communities, (in which the older members of the community are constantly introducing younger members to eligible prospects), the relatively unsupervised “western” way of dating, and the Muslim dating sites that are already out there just weren’t cutting it.

So they did what any modern third-culture kid would do and set up their own space online for young, hip Muslims to connect with people who also care about their faith but who are maybe more new world than old world.

Or, as they put it, “you want someone who loves to read poetry and dance in the rain.” 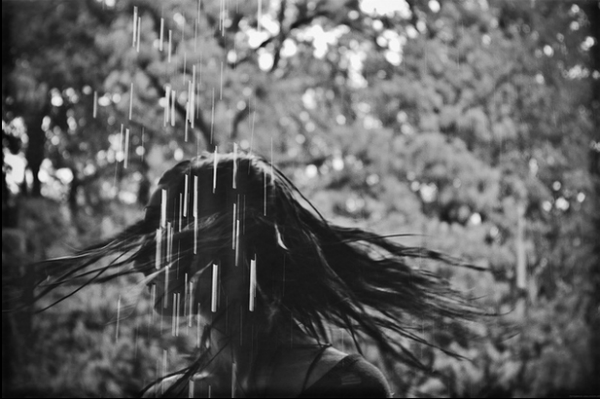 Keeping it anonymous, at least at first.

The site values anonymity, so there are no pictures or at least no pictures until you’ve been connected with someone. It’s actually super simple. All you have to do is send in your name (which they keep private and don’t publish on the site), your age, where you live, and a blurb about yourself. They ask for at least three “amazing facts” about you and then at least three “non-negotiables” in a significant other.

Give them a nickname and you’re good to go!

Scrolling through the site gives a tantalizing glimpse into the lives of Muslim singles from all over the world who have self-selected to identify as hipsters. You have “norme” from the United States who says, “I like poetry. I used to write, but I’ve developed something of a writers (sic) block. I started out appreciating Modern European poetry but recently I’ve been getting into Urdu poetry. I need to work on my Urdu/Farsi game, that’s when the verses really shine.”

Perhaps he would match up well with “caffeine” from Kentucky, a female “doctoral student, slaving away in the Bible Belt” who doesn’t own a TV and hates reality shows. She seems practical and down to earth; perhaps a dreamy poet is exactly what she needs. 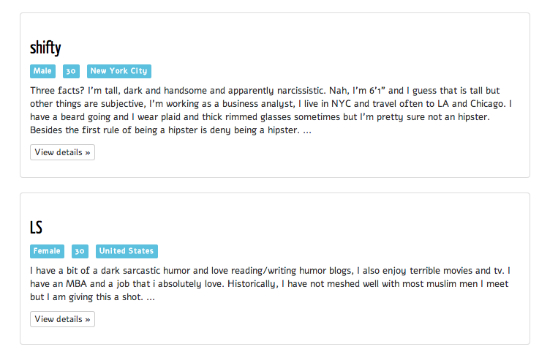 A dreamy Muslim poet, of course.

I’m not gonna lie: this site is strangely addictive. Despite the fact that I’m neither Muslim nor single, I keep getting drawn into these super simple snapshots of these people’s lives. There’s something impressively earnest about them, all the more notable for the fact that they’re on a site that has hipster in the name.

Of course, if you are Muslim and consider yourself a bit outside of the box, why not give Hipster Shaadi a shot? With such a simple profile, it’s hard to say no.

Sex Advice From A Fuck-Up: I Don’t Like Fucking My Husband

TweetEmail TweetEmailMy friend doesn’t want to have sex with her…