As it’s becoming more and more clear that the dating/hookup site and app market has hit the saturation point, we’re starting to see another one emerge: dating for couples.

(And I’m not talking about Ashley Madison.)

While some sites are event announcement spaces for everyone, regardless of whether or not they’re coupled, others are specifically targeting the already-paired with everything from discounted tickets to curated dates to exclusive access to last minute tickets.

Over the past month, I’ve tested out three different date sites –Delightful, UpOut, and HowAboutWe – so that you, reader, don’t have to. While all three of them definitely have their strong points, a clear winner for my personal needs has emerged over the past month: HowAboutWe. 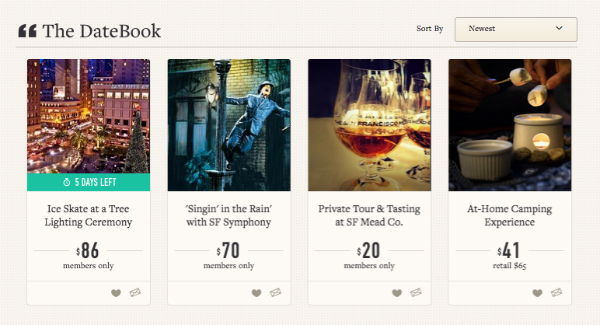 But isn’t that a dating site?

Yes, observant reader, it is a dating site. But because the whole point of a dating site is for people to find a partner, dating sites have a shelf life for each individual user. That means that they have to constantly be hustling for new users and adapting to a shifting demographic.

The folks over at HowAboutWe, however, did something really smart by figuring out how to keep their users, even after they’d found success on the site. They offer discounted, fun dates for couples that are still interested in going out, even if it’s only with each other. The site arranges their date into five collections: Eater Approved, Dates Under $25, Hearts Racing, Skill Sets, and Members Only. Each collection has fewer than ten dates listed, displayed in a very pretty tile format, with an eye-catching photo and the price for the entire date listed.

Which brings me to my favorite part about HowAboutWe:

It’s cheap. I don’t mean “cheap” like low quality; I mean cheap like “Holy crap, that’s an awesome deal and I’d never be able to afford to do that otherwise.

For example, in San Francisco, one of the dates on offer at the time I’m writing this is a wine tasting cruise on the San Francisco Bay for $80. That’s eighty bucks for a spin around the Bay in a “1958 classic cabin-top cruiser” while tasting four different wines form local Northern California orchards.

Oh, by the way, the normal price $140. Not only would I normally be reluctant to spend that much money (I am a writer and a startup girl, after all), I would never in a million years think of even a boat cruise with wine tasting as an option for me and my boyfriend.

So far I’ve only taken advantage of HowAboutWe’s awesome date deals once, two weekends ago, when my boyfriend and I had chicken and waffles for brunch and then bowled afterwards (he won), for $11. We had a great time and it gave us something fun and special to do together, outside of the usual work/sleep/repeat grind.

If your dating life feels like it’s been dragging a little since you’ve settled into partnered life, head over to HowAboutWe and check out what they have to offer in your city. With a little something for everyone, I really doubt you’ll be disappointed.

HowAboutWe isn’t just for singles! Check out their awesome couple-focused feature for original, interesting, affordable dates in your city.

Prostitution is often called “the oldest profession on Earth” and it could be argued that startups are the newest. So what can the new kids on the block learn from the old timers? Let’s take a look at a site that combines both the new format of a startup and the old business of men paying for women’s…