The whole “when do we make it Facebook official?” conversation has been overwritten, over-talked and overanalyzed and, frankly, I’m bored with it. My opinion? If you feel comfortable enough with someone to be regularly swapping bodily fluids, you should feel comfortable enough to say, “So, um, since we’re not seeing anyone else do you mind changing your single status?”

Much more interesting, in my opinion, is the whole phenomenon of cyberstalking and what it can do to your romantic relationships. I don’t mean that in a creepy “I’m-tracking-your-every-move-serial-killer” kind of way. I just mean the normal, day-to-day investigating that we all do when it comes to our personal relationships.

Okay, first of all, I’m totally pro-cyberstalking. Anyone who claims that they don’t look up their friend’s new boyfriend or the hot guy at the coffee shop or that girl from high school that tormented you and now works at McDonalds, is full of shit. I’m sorry, but I just don’t believe you. It’s fun, everyone does it; stop denying you’re human.

With that said, there are two situations in which cyberstalking, specifically Facebook stalking, can really screw you: when you’re obsessing over an ex and when you’re investigating a potential new partner.

The ex one is obvious: you see pictures of him with his new (stupid, ditzy, dyed blonde, obviously not as cute as you) girlfriend. You tell yourself you won’t keep looking but somehow, an hour later, you’re still reading nauseating exchanges between these brand new soulmates and wanting to puke on your keyboard.

Stop. Just stop. All you’re doing is making yourself feel terrible. Unfriend him for now and hope that when your heart has healed a bit more completely, you can be friends again. Until then there is really no reason for you to continue to torture yourself this way.

One more point on the ex situation: please, please resist contacting your ex when you’re feeling vulnerable. It’s so easy to write out a late-night-three-glasses-of-wine message about how you’ve done them wrong but, as a good friend of mine recently pointed out in a status update, it’s better to “first, take a beat. fuck it, take a nap. take a week-long vacation if you can. then decide if subjecting your ex to more of your nonsense and forever inadequate sorries is really as good of an idea as you thought it was.”

Chances are, after that break, you’re going to be glad you waited.

This type of cyberstalking isn’t as obviously a bad idea. You just met a cute guy through a friend. You think maybe he’s great but you’re not so sure, so you indulge yourself in a little research. I did this once, with a guy that seemed really cute, respectful, and interesting. To my horror, I found a long, dark rant on his profile about the terrors of love and why relationships are the worst thing that could ever happen to anyone.

This was after we cuddled for three hours, talked, and spent the day in the park together.

Where, ultimately, did my cyberstalking get me in that situation? Exactly nowhere other than majorly confused. How could I separate this nice, boyfriendable guy from the misanthrope on his Facebook profile? For all I knew, he could have written that rant years ago after a bad breakup and then forgot about it (who looks at their “About Me” in Facebook anyway?) or maybe he wrote it just yesterday. Regardless, it put a damper on my enthusiasm and I didn’t see him again.

Cyberstalking a potential love interest can be informative, but you have to be prepared to find information you honestly didn’t want in the first place. Resist the intensive cyberstalk and leave the mystery of getting to know someone to the late nights drinking wine together. The beginning is one of the best parts of any relationship so don’t spoil it by learning everything there is to know too fast.

On that note: don’t friend him right away, either. People say and do dumb things on Facebook. Let him prove himself IRL before you’re faced with the occasional idiotic status update. Maybe at that point you’ll be so into him that his idiocy will come off as cute instead of just idiotic.

Ultimately, cyberstalking can be fun, informative, or devastating. As with all things in your love life, make sure that technology is working for and not against you. Use the common sense I know you have, listen to your friends when they tell you to chill out, and don’t beat yourself up too much if you slip up occasionally.

And remember: you can always unfriend. 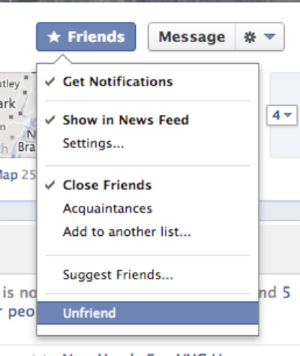 Sex Advice From A Fuck-Up: Better With The Lights Off?

TweetEmail TweetEmailBetter With the Lights Off by New Boyz is,…